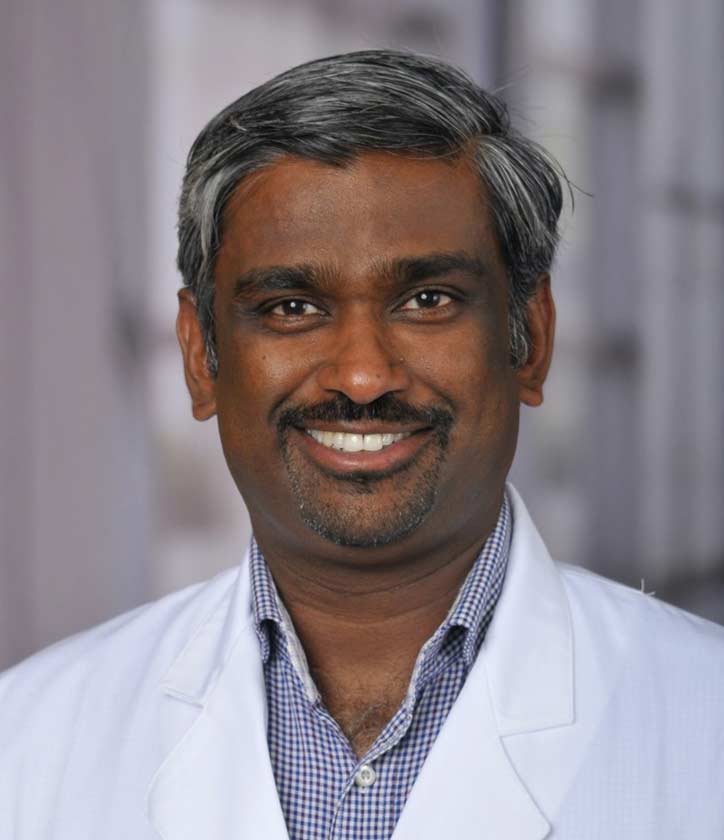 Dr. Prabha Nagareddy is an associate professor in the Division of Cardiac Surgery, Department of Surgery at The Ohio State University Wexner Medical Center and a member of the Diabetes and Metabolism Research Center (DMRC). Before joining the Ohio State Wexner Medical Center in July 2019, he was an assistant professor at the University of Alabama at Birmingham (UAB). Dr. Nagareddy and his team are working hard to understand the reasons behind increased cardiovascular disease risk in diabetic and obese subjects.

Dr. Nagareddy was born in India. No one in his family had ever graduated from high school. For him, the pursuit of knowledge has always been an obsession and the propelling force behind his achievements, including the desire to obtain a PhD. His interest in diabetes research grew while he was working for a pharmaceutical company that wanted to develop novel drugs to treat diabetic vascular complications, and his desire to learn more about diabetes research became more intense during his graduate and postdoctoral days.

While working as a postdoc with Dr. Ira Goldberg at Columbia University in New York, he devoted a large portion of his time to understanding why diabetic subjects are at greater risk for cardiovascular disease than non-diabetic subjects. Dr. Nagareddy’s philosophy is simple: when you have a bothersome question in front of you, whether it is related to life or research, you need to get to the bottom of it. Using various animal models that mimic diabetes and obesity in humans, he studied these signaling mechanisms at the cellular/molecular level to understand how and why, for example, blood glucose and lipids (cholesterol) increase the number of circulating white blood cells (WBCs) and how that impacts cardiovascular disease. Dr. Nagareddy and his colleagues identified neutrophils, a type of white blood cell that acts as a sensor when blood glucose level goes up and in response, releases a group of proteins called alarmins. These alarmins, as the name suggests, alter the innate immune system by interacting with certain receptors on cells in the bone marrow. Bone marrow is the place where most of our WBCs are produced. With conditions such as diabetes and obesity, the presence of abnormal levels of glucose and/or cholesterol in the blood increases the production of WBCs that, in turn, impacts the health of heart and blood vessels.

Dr. Nagareddy and his team at Ohio State are working on a number of research projects related to inflammation in the heart and blood vessels. They are examining the causative role of various risk factors such as diabetes, obesity, high salt diet, smoking, etc. on cardiovascular disease. They specifically examine the nexus between circulating factors released from WBCs and the stem cells in the bone marrow that increase the production of WBCs and enhance systemic inflammation. In one of the recently published studies that is relevant to the mission of DMRC, Dr. Nagareddy and his colleagues demonstrated how brief and intermittent episodes of high blood glucose levels contribute to inflammation in the blood vessels. Clinically, this finding is highly relevant to diabetic subjects who fail to maintain normal blood glucose levels around the clock (despite anti-diabetic medications) and as a result, experience a cardiovascular event. In another study that was published in Circulation, Dr. Nagareddy and his team identified a novel mechanism in neutrophils that amplify inflammation following a heart attack (myocardial infarction). He and his team are in the process of testing some novel drug molecules to target these abnormal pathways in neutrophils and examine how that would impact inflammation in the heart and subsequent heart failure.

Dr. Nagareddy believes that collaboration is the key to success in research, and he attributes his success to his strong collaborations, most of them from down under in Australia. He believes that collaboration is not limited to just sharing a few resources and reagents, it is forged with mutual trust, an attribute that is in short supply these days. Equally important are the trainees and students who are willing to explore the opportunities available in the lab to further their careers. “I am lucky to have hardworking people in the lab and to be able to freely discuss new ideas with great collaborators,” he says.

Dr. Nagareddy enjoys reading scientific literature and spending time with his collaborators and lab members discussing the latest scientific breakthroughs related to his research program. His lab has published several high impact articles, including two manuscripts in the journal, Cell Metabolism. One of these articles was selected for the “top 10 breakthroughs of the decade in immunometabolism” by the editors of the journal. This manuscript, which specifically focused on the origins of adipose tissue inflammation in obese subjects, is one of the most highly cited articles on the subject of immunometabolism.

Dr. Nagareddy devotes most of his time to his research program. When he ventures out of his lab, his interests include cooking, traveling and spending time with his wife, a rheumatologist at Ohio State, and their triplet girls.