The results obtained from the Microscan system are based on the minimum inhibitory concentration (MIC). The MIC is defined as defined as the lowest concentration of the antimicrobial that completely inhibits growth of the organism. The MICs are established and published by the Clinical Laboratory Standards Institute (CLSI) and incorporate the organism and antimicrobial. For most organisms and antimicrobials, the MICs are reported as susceptible (S), intermediate (I) or resistant (R).

Susceptible (S): implies that the isolate are inhibited by the usual achievable antimicrobial concentration when the recommended dose is used for the site of infection.

Intermediate (I): implies that the isolate may or may not be inhibited by the usual achievable antimicrobial concentration when the recommended dose is used for the site of infection.

Resistant (R): implies that the isolate will not be inhibited by the usual achievable antimicrobial concentration even when the recommended dose is used for the site of infection.

This chart demonstrates the broth dilution test in which bacteria are inoculated into tubes containing culture broth and varying concentration of the tested antimicrobial. The tubes are incubated to allow organism growth. The MIC is the lowest concentration of the antimicrobial that inhibits the growth of the organism. In the example, the MIC would be read as 8 mcg/mL. 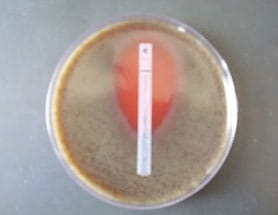 Etest: refers to an agar based method that uses a predefined, stable gradient of 15 antimicrobial concentrations of decreasing concentrations of a plastic strip used to determine the MIC of antimicrobials. The Etest is mainly used for organisms for which there are no established CLSI breakpoints or for organisms that are not approved for use with the Microscan system. It is rapid and easy-to use and the MIC is read at the point where the organism crosses over the strip.

Extended-spectrum beta-lactamase (ESBL) testing: ESBLs are enzymes produced in some Gram-negative organisms that confer resistance to penicillins, extended-spectrum cephalosporins and aztreonam. ESBLs are most commonly recognized in Klebsiella species and Escherichia coli (E. coli), but have recently been detected in a variety of Enterobacteriaceae and non-Enterobacteriaceae, including Pseudomonas species. Resistance mediated by ESBLs can be difficult to detect depending on the antimicrobial tested. 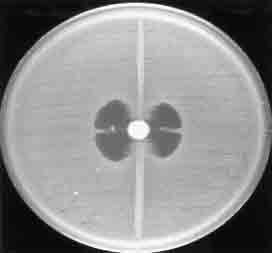 Carbapenamase testing: infections with carbapenem-resistant Enterobacteriaceae (CRE) are emerging as an important challenge in healthcare settings. Currently, carbapenem-resistant Klebsiella species is the most commonly encountered in the United States, but the prevalence in other Enterobacteriaecae species is increasing. The gene that encodes the resistance enzyme is carried on a mobile piece of genetic material (plasmid) which increases the risk for dissemination. A difficult in detecting CRE is the fact that some strains that harbor the resistance enzyme have MICs that are elevated but still within the susceptible range for carbapenems.

CLSI published a recommendation that carbapenem-susceptible Enterobacteriaceae with elevated MICs be tested for the presence of carbapenemases using the modified Hodge Test (MHT). The MHT is a phenotypic test used to detect carbapenemases in isolates demonstrating elevated but susceptible carbapenem MICs. Carbapenemase production is detected by the MHT when the test isolate produces the enzyme and allows growth of a carbapenem susceptible strain towards a carbapenem disk. The result is a characteristic cloverleaf-like indentation.

Inducible clindamycin resistance: refers to a test performed on Staphylococcus species that test resistant to erythromycin and susceptible to clindamycin using routine antimicrobial susceptibility test methods. Resistance to macrolides can occur via two different mechanisms with the resulting phenotypes illustrated in the table.