Unlocking mysteries of brain and spine 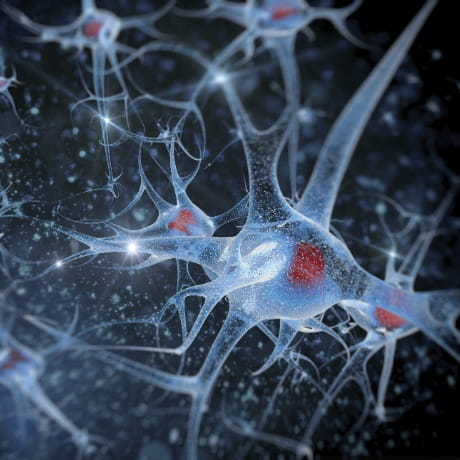 The Ohio State University College of Medicine is again leading the way. The following story illustrates how faculty from Ohio State Wexner Medical Center’s Neurological Institute, ranked 22nd nationally in neurology and neurosurgery, demonstrate the shared value of determination to lead the way in the neuroscience specialties.

The human brain has been described as the most complex structure in the universe. Working in concert with the spinal cord, it has more than 100 billion nerve cells and a quadrillion synapses relaying messages.

Tackling the mysteries of the brain and spinal cord is a daunting task. Yet, the physicians and scientists of Ohio State Wexner Medical Center's Neurological Institute exhibit extraordinary determination in unlocking knowledge to help people with neurological diseases such as brain tumors and Alzheimer's disease.

"It all comes down to the individual patients we diagnose and treat," says Doug Scharre, MD, interim chair for the Department of Neurology and co-director of the Neurological Institute. "We see them suffering. We're passionate about helping them and improving their lives. It's what drives the clinician, educator and scientist in us."

He notes that work on the human brain requires not only determination but also a great deal of collaboration among neurologists, neurosurgeons and neuroscientists.

Improving Decision-Making in an Alzheimer's Patient

Dr. Scharre describes a 2018 study from The Ohio State College of Medicine in which a neurosurgeon implanted electrodes into the frontal cortex of Alzheimer's patients' brains, and neurologists programmed a pacemaker to deliver deep brain stimulation. Their goal was to help restore patients' basic decision-making functions.

"At the end of our two-year study, two of three people in the study showed statistical improvement," he says. "One patient was able to plan an outing and handle money, make plans for an event and cook a simple meal. These may seem like minor improvements, but if the patient can't do it, the caregiver has to do it. After four years, the family still sees value in the stimulator."

Although the natural disease progression continues, the family has gained valuable time with their beloved family member.

Dr. Scharre continues, "It took great determination, but we were able to complete the study, publish it and inform others in the academic community."

He says it takes physicians, laboratory researchers, research coordinators, social workers, nurses, willing patients and many others to discover new treatments and cures.

The spirit of innovation and determination of neurology and neurosurgery teams is evident in many other pursuits throughout the Neurological Institute.

Developing New Treatment for People with a Deadly Inherited Disorder

Researchers at Ohio State College of Medicine have determinedly worked for years on a new drug called Spinraza®, which can help children, adults and infants with an inherited condition called spinal muscular atrophy. The disease causes loss of muscle tone, which leads to an inability to walk, eat and even breathe. In infants, it's the leading genetic cause of death.

For people with the disorder, a gene mutation causes lack of a protein that's essential for nerves to control muscle movement. Spinraza helps the body produce the necessary protein.

"We're taking this disease that has been a death sentence and changing the conversation," says Russell Lonser, MD, chair of the Department of Neurological Surgery and co-director of the Neurological Institute. "The medicine has been available for about a year and is having fabulous results."

Dr. Lonser sees gene therapy as an area that has been 15 years in the making and is now starting to demonstrate its potential. In simple terms, gene therapy is designed to reduce harmful substances in the brain and spinal cord or replace something that's missing.

"Our determination is focused on reducing the burden of neurological disease and treating the untreatable," he says. "We help make this happen by bringing in the best people in the country to do this work."

As Dr. Lonser concludes, "It's an exciting time to be working in the neurosciences. We're trying to accomplish new first-in-human trials to improve lives of patients with neurologic disease. We're bringing experts together to make things happen. Moving forward, we think we're going to be first in the world."

This is part of a series describing how Ohio State employees are leading the way by embodying the Buckeye Spirit in everything they do through shared values of determination, innovation, inclusiveness, empathy, sincerity and ownership.