Women in surgery at Ohio State: Leading by example 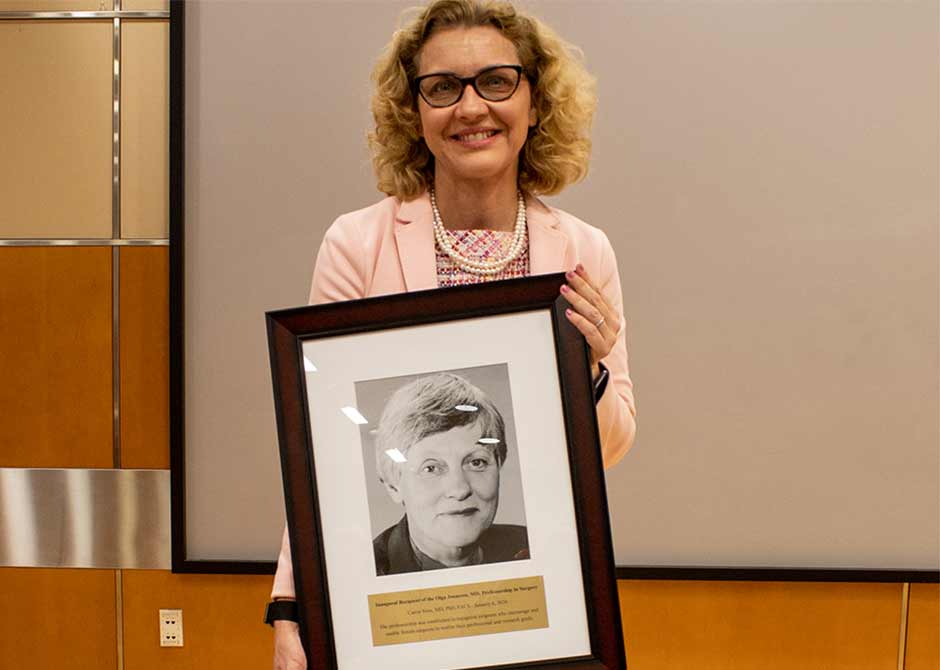 Carrie Sims, MD, PhD, says that even though female surgeons face similar hurdles as women in other male dominated fields, mentorship, support and practical advice do go a long way in lessening the isolation and loneliness that comes with the territory.


In 1987, Olga Jonasson, MD, FACS, a renowned transplant surgeon and immunology researcher, was named chair of the Department of Surgery at The Ohio State University College of Medicine, becoming the first woman in the United States to head an academic surgery department at a co-educational school of medicine.

Dr. Sims holds the university’s inaugural Olga Jonasson Professorship in Surgery at The Ohio State College of Medicine. The named-professorship was developed to honor Dr. Olga Jonasson and to recognize academic surgeons who are dedicated to encouraging and enabling female surgeons to realize their professional and research goals.

“Not only was she a trailblazer, but she was also a true visionary leader who served at a time when the glass ceiling was particularly tough to break,” Dr. Sims says. “She never stopped finding opportunities to support and uplift women.”

Dr. Sims is dedicated to carrying on Jonasson’s legacy and to creating the same support and notoriety around female surgical genius that is so readily awarded to men.

The Olga Jonasson Women in Surgery Summer Research Fellowship in the Department of Surgery is a new initiative that will allow four or five Ohio State rising second year medical students the opportunity to shadow a female surgical mentor and work with them to complete a research project.

“This will provide promising female medical students a robust, intensive exposure to academic surgery early on in their education,” Dr. Sims explains. “They can explore surgical health outcomes, health care disparities, translational research, among other topics, while working alongside our incredible female faculty.”

Dr. Sims credits current chair of the College of Medicine’s Department of Surgery, Timothy Pawlik, MD, MPH, PhD, for diverse hiring practices that have added many women to positions of leadership, further normalizing the visibility of this underrepresented group.  Dr. Pawlik has also been a staunch advocate for developing specific programs and opportunities for women in the department to mentor other women, including the creation of the Olga Jonasson Society. This local society aims to support women surgeons at Ohio State at every rank by offering fellowship, mentorship, and sponsorship.

Dr. Sims says that it’s vitally important to that women surgeon support each other and breakdown stereotypes of what being a surgeon looks like.

“There is a myth that if you go into surgery, you won’t have a life or a family or that you can’t be a surgeon and a scientist,” Dr. Sims says. “Seeing that other woman are successfully managing career and life, and learning from each other’s experiences, helps every woman surgeon reach their own individual goals and aspirations.”

Dr. Sims says that while the deck is still stacked against women surgeons, having conversations about bias against female surgeons and implicit bias can help fellow female surgeons figure out what the pitfalls are and develop potential solutions.

She believes there is power and validation in knowing that one is not alone in their experience of the day-to-day struggles at work. She also asserts that it helps to know that other female surgeons also go through a whole song and dance that their male counterparts are spared.

“This is a societal problem and a structural problem,” Dr. Sims says. “We show each other how we are dealing with it, while we are putting pressure on the profession and the world to change.”

This bit of truth serum speaks to the tenacity and grit it takes on the part of everyone alike to enable change and influence culture to ensure women are represented, and treated, equally. It also celebrates trailblazers and glass ceiling breakers of the past who have been in their shoes.

“Sure he (Frank Sinatra) was great, but don’t forget Ginger Rogers did everything he did backwards…and in high heels!” - cartoonist Bob Thaves, 1982