Jack Menashe and the Roosterfish

This is the story of the one that didn't get away.

Lifelong sport fisherman Jack Menashe will be spending more time on the Sea of Cortez now that doctors at The Ohio State University Wexner Medical Center have replaced a failing replacement valve in his heart. 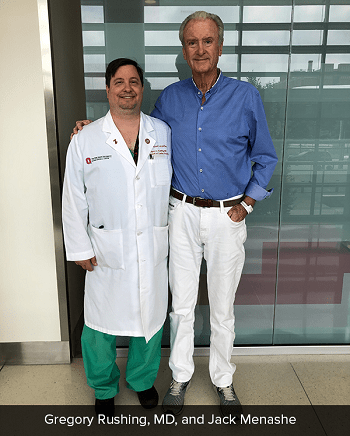 While that might sound like a routine operation, his story feels more like chasing a prized roosterfish, the elusive Pacific Ocean trophy known for its feathery dorsal fins, across open water.

Menashe himself didn’t think there was a “snowball’s chance in hell” of the U.S. Food and Drug Administration (FDA) approving the surgery he needed to save his life. But his Ohio State Richard M. Ross Heart Hospital doctors reeled it in.

Menashe is now the first patient in the world to have received a transfemoral procedure to implant a J-Valve in a failed surgical valve. This use of this device had previously been approved for only seven others in the United States.

“I’m convinced that the credentials of this hospital are what made this happen,” the 75-year-old Menashe says. “I’m certainly glad to have well-educated doctors who are willing to take risks and push the margins, and that’s what they did.”

In February 2019 Menashe flew across the country to the Ohio State Ross Heart Hospital to get his life back. Though he had homes in Colorado, Montana and San Jose del Cabo at the time, he chose to travel to Ross Heart Hospital based on the recommendation of his daughter, Diane, a Columbus attorney, whose friend received outstanding care at the Ohio State Wexner Medical Center.

By then, Menashe was living on borrowed time. He had been ailing for months, laboring over each breath and spending most of his time confined to a chair.

An aortic valve replacement (TAVR) that had been surgically implanted in 2002 was failing fast. Without a new replacement valve, he would not live much longer.

His team of Lilly and Rushing proceeded to replace the old valve with a new one on April 5. But initially, the commercially available valve didn’t latch because the old valve had lost its natural stickiness.

Menashe awoke from the operation to learn that he did not have a new valve — or a new lease on life.

“That was quite an emotional moment,” Menashe recalls.

While Menashe went to California to stay with a friend and recuperate, Lilly and Rushing changed course.

The Ross doctors appealed to the FDA for “compassionate use,” a potential pathway for a patient with an immediately life-threatening condition to gain access to an investigational medical product for treatment outside of clinical trials when no comparable or satisfactory alternative therapy options are available, according to the FDA website.

In Menashe’s case, doctors requested access to the Canadian J-Valve, which is made with “clips” that could help hold the valve in place. His doctors had to anticipate a further complication: Menashe was not a candidate for open-heart surgery, meaning the entire procedure had to occur via the artery in the groin.

Menashe had no reservations about undergoing a surgery that had never been done before.

He and his wife, Jane, had been living their dream, splitting their time between Colorado and San Jose del Cabo. After a career of building and selling businesses, he had found the perfect year-round outdoor lifestyle. He wasn’t ready to let it go.

“I had a shot at something and I wanted to take it,” he says.

Menashe had the operation on June 20th.

Two weeks later, he was back on his boat in the Sea of Cortez. He caught five fish that day. One of them was a 14-pound roosterfish.