College of Medicine committed to strengthening resources for underrepresented

Outside of historically black colleges and universities, The Ohio State University College of Medicine is one of the top medical schools in the nation for its percentage of Black students, according to U.S. News and World Report. At 13%, it matches the representation of African Americans in the United States.

The college has made tremendous progress attracting a high-achieving student body that’s diverse.

The challenge now, says Jennifer McCallister, MD, associate dean of Medical Education at The Ohio State University, is giving those minorities the support and resources they need to feel welcome and to be successful in their careers. 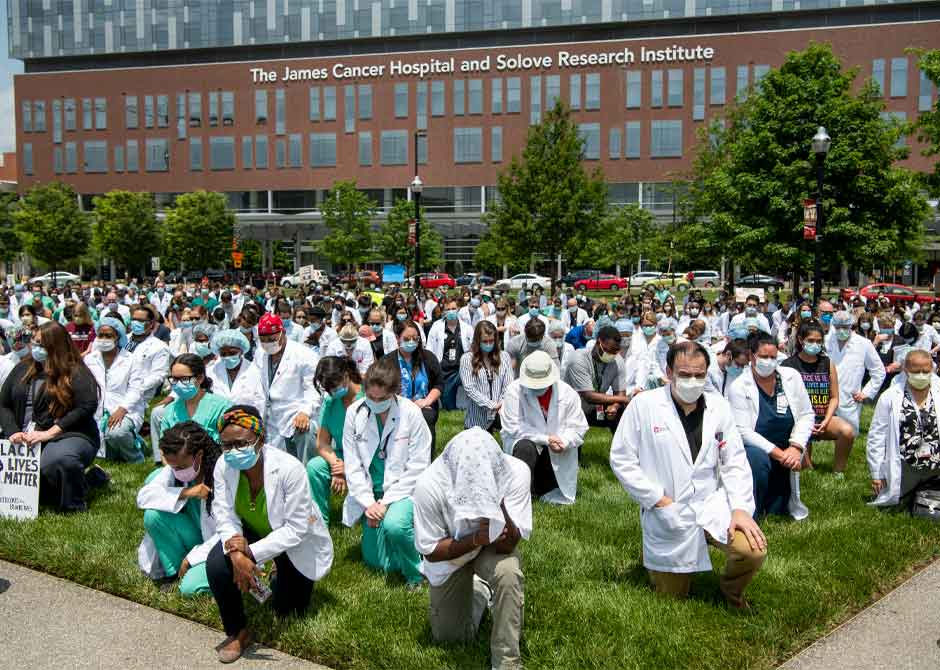 In 2020, Ohio State College of Medicine faculty and leadership heard loud and clear—not just from the protests throughout the U.S., but also from their own students—that racial bias is far from eradicated in their worlds.

“There needs to be a collaborative and cooperative effort by many at every single layer of an organization to actively and deliberately address the issues of systemic racism that have been woven, intentionally or unintentionally, into policies, practices and culture,” Dr. Rankin says.

The multidisciplinary group of 10 faculty and seven students meets biweekly as a whole and weekly in subcommittees. Their aim: To build a framework that can more quickly and more broadly address the unique needs of MD students from backgrounds underrepresented in medicine, and support cultural competency for all.

Their goals also overlap with the initiatives put forth by The Ohio State University Wexner Medical Center’s Anti-Racism Action Plan, which provides guidelines for the medical center and all of Ohio State’s health science colleges.

Short- and long-term aspirations include:

The Equity and Anti-Racism Task Force has begun examining how the MD curriculum at Ohio State can better shift the conversation from race-based teachings to racism as its own public health crisis.

“But that’s not true,” she says. “It’s not being of a certain race that makes you more at risk—it’s having poorer social determinants of health, such as less access to your primary care physician, limited transportation or limited access to community resources.”

The goal is to pause and reassess how faculty are teaching these concepts, and to provide Ohio State faculty with the resources to erase historic biases.

For many years, students in the Ohio State College of Medicine were randomly assigned faculty coaches who help advise their professional development and career portfolios. Beginning in the 2020 - 2021 school year, students with Black/African American and Latinx/Hispanic backgrounds can also be assigned faculty mentors from similar backgrounds, says the program’s coordinator, Joanne Lynn, MD, associate dean of Student Life at the College of Medicine.

“We matched interested Black and Latinx incoming first-year medical students with a faculty mentor in same-gender, same-race/ethnicity pairs,” Dr. Lynn says. “The volunteer faculty mentors were given mentoring guidelines, and they meet with their students (virtually or in person) at least once a month.”

In winter 2020, a survey will gauge success and satisfaction in the program.

The first step to mitigating bias is recognizing that it happens.

“Clinical evaluations in an MD student’s third and fourth years have a profound impact on their academic standing and their potential to match to their residency of choice,” Dr. McCallister says. “We’re looking at current evaluation structures to analyze the potential effects of bias based on skin color, for example.”

In spring 2020, the death of George Floyd and a new racial awakening in the U.S. lit a fire under college leaders.

“Prior to a certain time, there simply was not enough support, attention or momentum directed toward these efforts, but now we cannot move forward without getting this right,” Dr. Rankin says. “The time to act is now, and the momentum must be carried forward for many years.”

Among the first actions to more intentionally guide what Dr. Rankin calls “the ethical and moral compass of our medical school” was a new micro-aggressions workshop preparing students for the clinical environment.

It was just the beginning. Directly facing the problems that perpetuate health care disparities, then creating solid frameworks to address those problems, are the necessary next steps in serving the Ohio State College of Medicine’s minority students, the task force leaders say.

“We got them here to Ohio State,” Dr. McCallister says. “Now we owe them our support.”