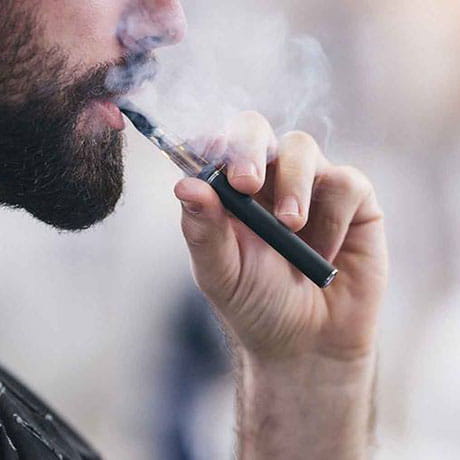 It’s an ambitious project, but that was intentional. The American Heart Association was looking for bold, groundbreaking research to provide some desperately needed answers: Why are children growing increasingly addicted to e-cigarettes? What’s vaping doing to their hearts, their lungs, their brains? Can we intervene before it’s too late?

Ohio State’s proposal called for a massive undertaking: a collaboration, led by Peter Mohler, PhD, vice dean of research at The Ohio State College of Medicine, chief scientific officer and director of the Dorothy M. Davis Heart and Lung Research Institute, and Loren Wold, PhD, assistant dean for biological health research in the College of Nursing and a professor in the Ohio State College of Medicine’s Department of Physiology and Cell Biology. They pulled in experts from across the university in the colleges of Medicine, Nursing, Public Health and Engineering, and tapped researchers from the Center for Tobacco Research at The Ohio State University Comprehensive Cancer Center – Arthur G. James Cancer Hospital and Richard J. Solove Research Institute.

The research would touch nearly every part of the problem, from studying the effects of e-cigarettes on young users to finding ways to make them less appealing to kids and developing methods to help young vapers kick their addiction.

“There’s probably only a handful of institutions that could have done this,” says Theodore Wagener, PhD, the director of the Center for Tobacco Research and an associate professor in Internal Medicine at the Ohio State College of Medicine. “Because of the number of tobacco and heart researchers we had here at Ohio State, it made it easy. With seven health science colleges on one campus, it enables more collaborative team science and strengthens our ability to quickly translate our research into actionable patient care.”

Alongside Boston and Yale universities, Ohio State’s proposal was announced as one of the grant recipients of the American Heart Association’s vaping research initiative, called ENACT: End Nicotine Addiction in Children and Teens.

Ohio State’s $5.5 million award, among the largest ever granted to the university by the American Heart Association, kicked off a flurry of work that has no choice but to move quickly—because of the urgent threat posed to young e-cigarette users, the project has a two-year deadline.

“Our hope is that these projects greatly advance our knowledge about youth vaping—in particular what impact it has on young people’s bodies and what the most effective approaches might be to help e-cigarette users, including young people, quit,” said Liz Klein, PhD, MPH, associate professor of Health Behavior and Health Promotion in the College of Public Health.

Ohio State’s project—VERIFY: Vaping’s End Through Research and Innovation for Youth—will explore four areas of youth vaping, each with a specific aim and a dedicated team of experts. Its four components will:

“It’s extremely important because these products are not regulated,” Dr. Wold says. “A whole new generation is getting addicted to nicotine—kids are using these electronic delivery systems and inhaling this stuff into their lungs. Our goal is to understand what it’s doing to them and help them stop.”