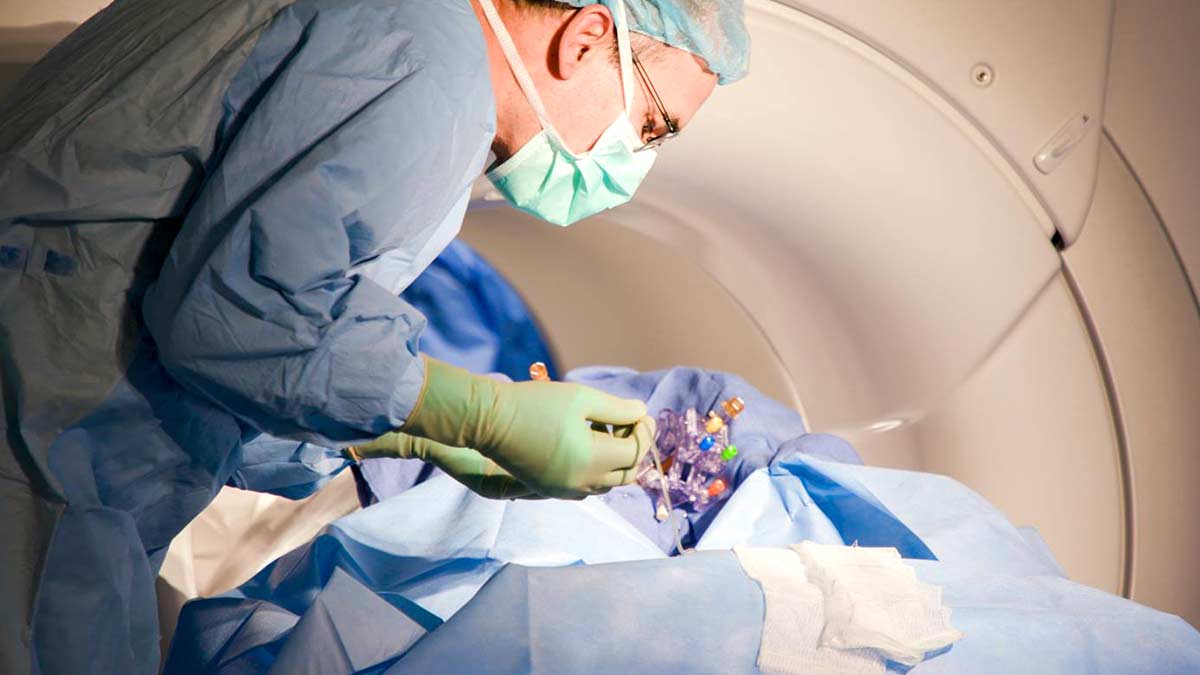 Decades of research into gene therapy, where new genetic material replaces a faulty gene or adds a new gene to cure disease, has reached a pivotal point in the ability to address untreatable or incompletely treated neurological diseases. Many first-in-human trials, which bridge advances in basic science to the practical, translational application of that knowledge, are now underway at Ohio State.

“We have a large portfolio of active, and soon-to-be active, first-in-human gene trials of direct infusion for gene therapy and treatment of Parkinson’s, Alzheimer’s and Huntington’s diseases as well as AADC deficiency and multiple system atrophy,” says Russell Lonser, MD.

Lonser, who serves as chair of the Department of Neurological Surgery at The Ohio State University College of Medicine and as co-director of the Ohio State Neurological Institute, says funding from the National Institutes of Health will ensure that Ohio State is a dominant player in directing gene therapy in the future.

The Human Genome Project formed the basis for the understanding that genes are made up of DNA, and they play an essential role in determining the function of each cell in the body. Living beings are made up of 30 million codes of DNA. If even one of these codes is damaged, a genetic alteration may occur, causing a genetic disease which is often debilitating and life-threatening.

Lonser and Krystof Bankiewicz, MD, professor of Neurological Surgery at the Ohio State College of Medicine, are already quite well known among patients and peers for their novel delivery of gene therapy in targeted brain structures of patients. They developed a technique where they monitor the direct infusion of genetic material into the brain using real-time MRI imaging so they can perfectly target an area to affect a cure.

They used this technique to infuse a viral vector that carries a gene that makes the missing enzyme that produces dopamine and serotonin in the central nervous systems of children suffering from aromatic L-amino acid decarboxylase (AADC) deficiency, a rare deadly, neurodevelopmental disorder. Children with AADC lack muscle control, and are usually unable to speak, feed themselves or even hold up their heads. They also suffer from seizure-like episodes called oculogyric crises, that can last for hours.

When Lonser and Bankiewicz surgically infuse this functioning gene into the specific site in the brain, the brain integrates the gene into its circuitry, which is comprised of a cluster of neurons. These neurons receive electrochemical information that the circuit then modifies and transmits to other circuits in the brain that need this modified genetic material to function properly. MRI imaging allows the team to see the process take place during surgery and then see it further play out by improved functioning in patients.

“Remarkably, the seizure-like episodes are the first symptom to disappear after gene therapy surgery, and they never return,” Bankiewicz says. “In the months that follow, many patients experience life-changing improvements. Not only do they begin laughing and have improved mood, but many are able to begin speaking and even walking.”

Early data has shown that the results and improvements in motor functioning are not waning as time passes. Further, by targeting a specific brain site and manipulating only the circuits in the brain that are diseased, versus treating the entire brain, patients do not suffer side effects on other bodily systems.

“This work provides a framework for the treatment of other human nervous system genetic diseases. It’s our hope that this will be first of many ultra-rare and other neurologic disorders that will be treated with gene therapy in a similar manner,” Bankiewicz says.

The findings described in the AADC study are the culmination of decades of work by teams from multiple academic institutions, including University of California San Francisco, Washington University in St. Louis, Medical Neurogenetics Laboratory in Atlanta, St. Louis Children’s Hospital and Nationwide Children’s Hospital in Columbus, Ohio. The research was supported by the National Institute of Neurological Disorders and Stroke and foundational grants, including the AADC Research Trust, the Pediatric Neurotransmitter Disease Association and funding from The Ohio State University.