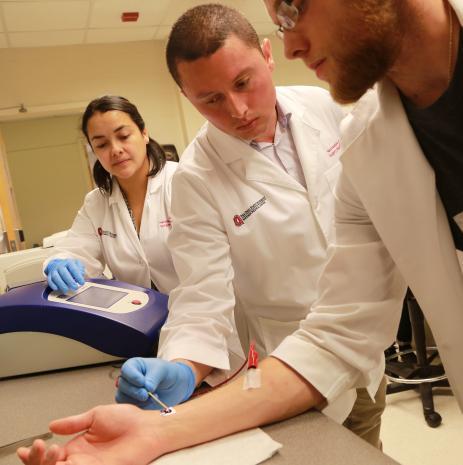 Daniel Gallego-Perez, PhD, an assistant professor of Biomedical Engineering and General Surgery at Ohio State, explains TNT as a way to instruct skin tissue to take over functions previously performed by other cells in the body.

With TNT, a silicon-based chip contains the signals or reprogramming genes that are to be transferred into the skin cells. Using electric fields delivered in just ~100 milliseconds, ample amounts of the new gene copies are placed into the skin cells via nanochannels– which are very small conduits approximately 100 to 1000 times smaller than the diameter of a human hair.

Initially developed several years ago by Dr. Gallego-Perez and his team, TNT has already proven successful at delivering reprogramming genes into mouse skin to induce vasculogenic and neurogenic reprograming in vivo. Now Dr. Gallego-Perez has received a one-year, $736,000 grant from the National Institute of Diabetes and Digestive and Kidney Diseases for related research.

In this newly funded phase I study, Dr. Gallego-Perez will work with Ohio State University College of Medicine Associate Professor Kristin Stanford, PhD on reprogramming skin tissue into brown adipose tissue for the treatment of obesity. Brown adipose tissue, or brown fat, is one of two types of fat in humans and other mammals. Sometimes called “good” fat, its primary function is heat regulation and several studies suggest it also plays a role in weight regulation.

On a simultaneous and parallel research path, Dr. Gallego-Perez will collaborate with University of Chicago Professor of Medicine Raghavendra Mirmira, an international leader in type 1 diabetes research, on reprogramming skin tissue into insulin-producing tissue.

“The data we get from these two study sections will allow us to optimize the process and confirm both its safety and efficacy,” says Dr. Gallego-Perez. In subsequent research phases, the goal will be to scale TNT to other mammals and then humans.