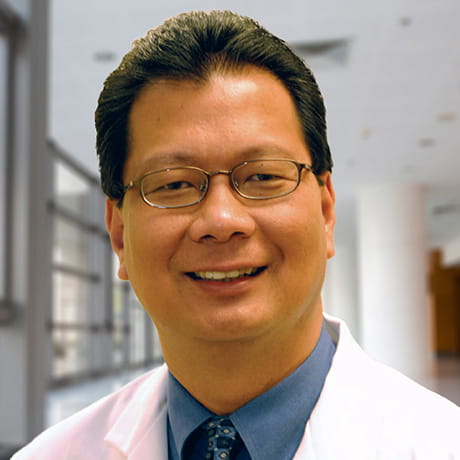 Researchers in the Magalang laboratory are examining the effects of intermittent hypoxia (IH) — the main stimulus implicated in the health-related consequences of obstructive sleep apnea. Dr. Magalang is interested in the effects of IH on adipose tissue biology, particularly its effects on adiponectin — an adipocytokine with anti-inflammatory, anti-diabetic and anti-atherogenic properties.

Dr. Magalang uses a variety of models, including cellular systems, animal models and clinical research involving human subjects. His team has shown for the first time that intermittent hypoxia reduces the secretion of both total and high-molecular-weight (the active form of the hormone) adiponectin by adipocytes.

In their in vivo mouse model, the data show that transgenic mice over-expressing adiponectin are protected from intermittent hypoxia-induced insulin resistance. The team's preliminary study in humans showed for the first time that treatment of obstructive sleep apnea with CPAP for three months increased the levels of high-molecular weight adiponectin. Dr. Magalang's group has published the first and only study that has used cardiac MRI to examine the effects of CPAP on cardiovascular remodeling.

In addition, through a collaborative effort with Dr. Philipp Scherer, who first described adiponectin, Dr. Magalang and his team have a published a seminal paper. It showed that hypoxia — through activation of hypoxia-inducible factor 1 (HIF1)  — fails to induce the expected pro-angiogenic response in adipose tissue, but rather HIF1 initiates adipose tissue fibrosis with an associated increase in local inflammation. Collectively, these observations are consistent with a model in which adipose tissue hypoxia serves as an early upstream initiator for adipose tissue dysfunction by inducing a local state of fibrosis.

The team has extended these findings in a polygenic animal model of type 2 diabetes mellitus (Tally-Ho JngJ mouse). Their results indicate that IH mimicking the hypoxic stress seen in sleep apnea patients worsened glucose tolerance in the male Tally-Ho mice. This was associated with HIF1α stabilization, lysyl oxidase (LOX) activation, fibrosis and macrophage infiltration in the visceral adipose tissue of TH mice.

Collaborators of this consortium include sleep disorder and cardiovascular experts from the United States, Iceland, Germany, France, Taiwan, Australia and Brazil. In this consortium, Dr. Magalang has completed a project examining the agreement of polysomnography scoring of respiratory events and sleep among international sleep centers. Their results suggest that centralized scoring of polysomnography may not be necessary in future research collaboration among the SAGIC centers.