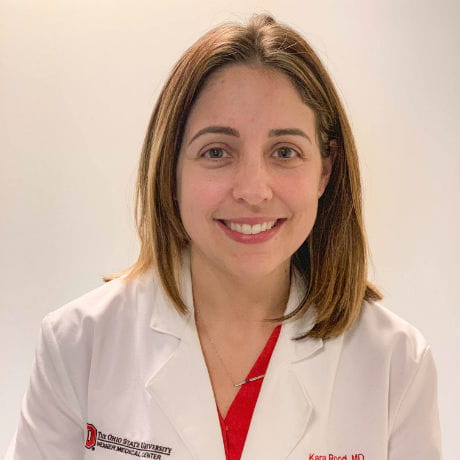 Researchers at The Ohio State University College of Medicine have found that a simple test can rapidly detect one of the world’s most deadly pregnancy-related conditions, which could have a major impact on global health.

Preeclampsia, which affects 5 to 8 percent of pregnancies worldwide, is characterized by high blood pressure and protein in the urine. The disorder is the number one reason physicians decide to deliver children prematurely and is responsible for approximately 18 percent of maternal deaths in the U.S.

If undetected, preeclampsia can lead to eclampsia, one of the top five causes of maternal and infant illness – including seizures and coma – and the cause of 13 percent of maternal deaths globally. Pregnant women may be induced and unborn children delivered early, even if there’s just suspicion of preeclampsia.  Premature birth is also a concern because it increases the risk of learning disabilities, cerebral palsy and blindness in newborns.

In an effort to reduce morbidity among expecting mothers and their unborn children, maternal-fetal medicine and perinatal physician-researchers from The Ohio State University Wexner Medical Center and Nationwide Children’s Hospital, both in Columbus, Ohio, designed a rapid tool to identify preeclampsia using an affordable and non-invasive clinical “red dye-on paper” test and piloted it in a clinical study at The Ohio State University College of Medicine.

Dr. Kara Rood, first author of the collaborative project and a fellow in the division of maternal-fetal medicine in the department of obstetrics and gynecology at Ohio State’s Wexner Medical Center, presented the results today at the Society for Maternal-Fetal Medicine’s annual pregnancy meeting in Atlanta.

“This is the first clinical study using the point-of-care, paper-based Congo Red Dot (CRD) diagnostic test, and the mechanism proved superior in establishing or ruling out a diagnosis of preeclampsia. Our findings will have a huge impact on the health of women and children,” Rood said.

The researchers enrolled 346 pregnant women who were being evaluated in the labor and delivery triage unit at OSU Wexner Medical Center for preeclampsia, using the CRD urine test. Trained clinical nurses analyzed results at the patient’s bedside before a final diagnosis was made, and the clinical team was unaware of the results. Additional biochemical tests for preeclampsia were performed on the urine.

Eighty-nine of the pregnant women had a clinical diagnosis of preeclampsia, and 79 percent of these women had a medically-indicated preterm birth for preeclampsia, with an average age of delivery at 33 weeks gestation. The CRD test was superior to the other biochemical tests, with an accuracy rate of 86 percent.

These findings confirm that the CRD test is a simple, “sample in/answer out” clinical tool that allows for very accurate and rapid diagnosis of preeclampsia, Rood said.

Initially, Dr. Irina A. Buhimschi, director of the Center for Perinatal Research in The Research Institute at Nationwide Children’s, and team discovered that preeclampsia may result from a collection of improperly folded proteins similar to those associated with Alzheimer’s disease. They studied the urine of pregnant women with preeclampsia and were the first to characterize the range of misfolded proteins, which led to the creation of the CRD test. Preliminary results, which were published in the July 2014 issue of Science Translational Medicine, showed an 89 percent accuracy rate.

“This new point-of-care test is a more user-friendly version than the one in this publication, and can help identify preeclampsia even before clinical symptoms appear,” Buhimschi said.

The consortium of basic science researchers and clinicians from The Ohio State University College of Medicine and Nationwide Children’s is currently investigating how each misfolded protein collection affects pregnant women. The answer might assist with developing an effective treatment or even preventing preeclampsia.

Other researchers who participated in this project were Catalin S. Buhimschi, Theresa Dible, Shaylyn Webster and Philip Samuels of Ohio State and Guomao Zhao of Nationwide Children’s.