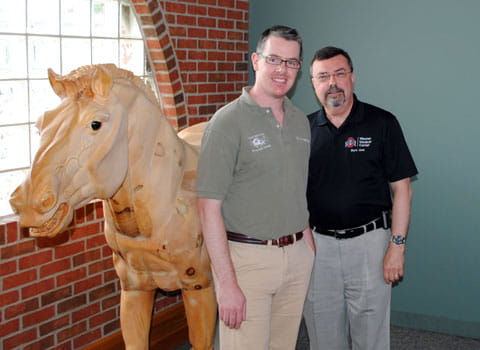 “A case that no one will forget,” is how Dr. Samuel Hurcombe describes the unique collaboration between Ohio State’s College of Veterinary Medicine and the Department of Surgery. Dr. Hurcombe, assistant professor of equine emergency and critical care at the Galbreath Equine Center and Dr. Larry Jones, associate professor of clinical surgery and director of the Ohio State Comprehensive Burn Center and their teams joined to perform skin grafts on a horse who suffered a major burn injury with the goal of restoring normal life.

The seven-year-old horse, Northstar, was maliciously attacked in September of 2012 by an unknown person or persons. He was doused with an accelerant and set on fire. Northstar’s owners found him in a field at their Pennsylvanian farm in shock and severe pain. The third degree burn covered almost 50 percent of his body, including his back and shoulder. The wound extended to all layers of skin and even exposed bone in some areas.

Dr. Larry Jones, who has over 30 years of experience with skin grafting, learned of Northstar’s attack and injuries in the news media and approached Dr. Hurcombe’s group. “I was interested in what I could learn from this case,” said Jones. Dr. Hurcombe initially treated Northstar by performing punch grafts, or small skin grafts, to close smaller wound areas on the neck and shoulders. While planning to close the larger wounds, Dr. Hurcombe reached-out to Dr. Jones and the team at the Burn Center. The close proximity of many experts in several fields made Ohio State an ideal location for Northstar’s treatment. “Ohio State provides a unique setting for this type of collaboration,” said Hurcombe. Drs. Jones and Hurcombe discussed using human burn care techniques and medications for the procedure. “We took the same approach, using tools and techniques normally reserved for humans, applied them to this horse in the hopes of making him better,” said Jones.

One of the challenges Dr. Jones encountered was deciding the correct depth to set the dermatome, an instrument for removing skin, when harvesting healthy skin for the graft. By researching the available literature, Jones determined that the horse’s graft needed to be approximately twice as thick as that of a human. The graft was harvested from the horse’s chest and processed with a mesher, a tool that expands the graft to almost four times its original size. Following the graft, the wound was dressed with bandages impregnated with silver to prevent infection.

Dr. Hurcombe describes Northstar as very bright and alert with a strong attitude. “The fact that he is still so trusting of people is pretty amazing.” Healing of the skin graft causes pain and a great deal of itching. Northstar is being treated with the antipruritic drug Gabapentin, another human medication, to control pain and itching. He is also gently tethered to prevent him from rolling on the ground or rubbing against his stall to scratch himself. Northstar still faces a long road to recovery. The treatment plan is to allow Northstar to temporarily return to his home to heal and as a respite from treatment and then to undergo another graft within the coming months to close the remainder of the wound.

“His skin graft take (adherence) is a little less than what I am used to in humans,” Jones noted. “But as Dr. Hurcombe reminds me, considering his hospital bed is in a barn, he is doing very well. I view Northstar in the same way as I do any of my other patients. I just want him to get better and go on and live his life as a horse.”

Several companies have donated the instruments and medications for Northstar’s care. The Ohio State University College of Veterinary Medicine has created the Northstar Equine Emergency Critical Care Fund in honor of this brave horse. Donations to this fund will be used to support equine critical care patients in need of veterinary care and financial support at the Galbreath Equine Center. Donations to the Burn Fund, used to help pay for dressing supplies and pressure garments for patients, may be made through The Ohio State University Foundation.