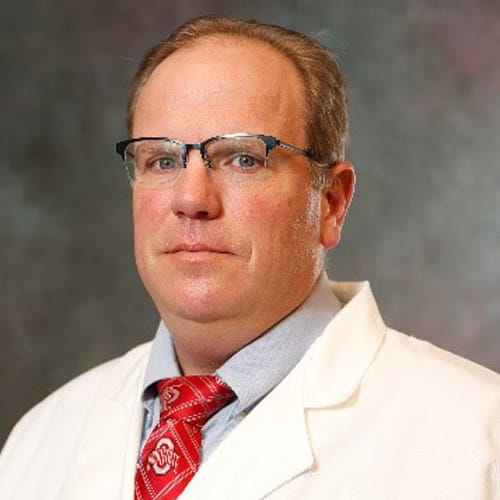 Dr. Wold’s early work in science focused on the mechanisms of diabetic and obesity-induced cardiomyopathy, particularly the role of reactive oxygen species formation. Following graduate school at the University of North Dakota, he began a postdoctoral fellowship under the mentorship of Dr. Robert Kloner, MD, PhD at the University of Southern California (Heart Institute at Good Samaritan Hospital)), an international expert in cardiac physiology. Dr. Wold’s work in the Kloner laboratory defined the role of cellular cardiomyoplasty in regrowth of the myocardium following myocardial infarction. Studies he conducted resulted in several high profile publications that helped to determine that once bone marrow-derived mesenchymal stem cells were injected into the myocardium of infarcted rat hearts, they were able to remain in place for up to six months, but the effect of improving function was only transient. Dr. Wold and his team also showed that they could mimic the functional improvement afforded by stem cell injection with an inert injection of collagen. These studies formed the foundation for many current studies examining the role of stem cells in rebuilding the damaged heart. Dr. Wold then began investigating the effect of the environment on the heart, which led to the first publication on the effects of ultrafine particulate matter on the heart, published in Cardiovascular Toxicology.

After observing that short-term administration of environmentally-derived ambient particulate matter caused significant cardiac effects ex vivo, Dr. Wold and his team began to systematically define the direct and indirect pathways whereby air pollutant particulates are able to affect the cardiovascular system. Through these studies, they began to dissect the role of lung-derived paracrine mediators as well as cardiac specific effects of particulates on the heart, which began to describe the epidemiological evidence of increased cardiovascular risk on days of high air pollutants. These initial studies were some of the first to define this cardiac specific effect of ambient particulate matter, as well as the role of inflammation and reactive oxygen species in these processes. Results obtained during this preliminary work formed the foundation for Dr. Wold’s initial independent funding from the American Heart Association Scientific Development Award, followed by his first National Institute of Environmental Health Sciences NIH R01 award.

Additional studies in Dr. Wold’s laboratory have investigated the role of cancer cachexia in muscle wasting, depressive mood and cardiovascular alterations using a model of c26 adenocarcinoma treatment. This project, began in collaboration with Drs. Donna McCarthy and Peter Reiser, resulted in several publications which have characterized the role of several mood-altering drugs in abrogating the cancer cachexia phenotype, resulting in improved mood and muscle function. Dr. Wold and the team also received an NIH R01 award for these studies. They have recently shown that the heart dysfunction evident following c26 adenocarcinoma cell placement is alleviated with Losartan treatment.

More recently, Dr. Wold’s laboratory has been collaborating with the laboratories of Drs. Combs and del Monte to characterize the role of age and environmental stressors on peripheral changes affecting the brain and possibly potentiating Alzheimer’s Disease progression. These studies, recently published in PLoS ONE, characterized the effects of PM2.5 exposure on C57Bl/6 mice and showed that environmentally-relevant levels of pollutants are able to cause early AD-like alterations in brain structure. These preliminary studies formed the foundation for an R01 from the National Institute of Aging which is investigating the role of beta-amyloid plaques in the heart of Alzheimer’s mice exposed to air pollution short- and long-term. Other related studies are investigating the effect of e-cigarette exposure on the heart, with an R01 from the National Heart, Lung and Blood Institute an ENACT (End Nicotine Addiction in Children and Teens) grant from the American Heart Association, both in collaboration with Dr. Peter Mohler. An additional U01 award with collaborator Dr. Mitchell Cohen from New York University is investigating the effect of World Trade Center dust on the pulmonary and cardiovascular systems in a rat exposure model. Outside of independent laboratory experiments, Dr. Wold is actively involved in troubleshooting methodologies for College of Nursing investigators to incorporate into their own research programs. He is also heavily involved in College and University service, having served on the University Hearing Committee for the past 5 years. Outside of OSU, Dr. Wold chair several study sections for the American Heart Association and the NIH, and was recently elected a Fellow of the American Physiological Society (FAPS). Dr. Wold also served as Editor-in-Chief of the Elsevier journal Life Sciences since 2013.